A Ride with a Tuk-tuk

The auto rickshaw or tuk-tuk is a chief mode of transportation in the countries of Thailand, Cambodia, Laos, Vietnam and other parts of the world. The tuk tuk, popularly known as rickshaw is a motor vehicle with a cabin attached to the rear. This is an urban transport for hire. This is popular in places where traffic congestion is a problem. This can also be found and widely used in China, India, and other Latin American countries. 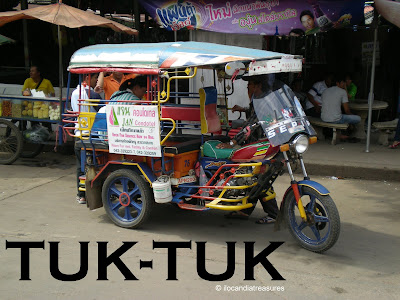 On my previous visit to Indochina, I was able to ride tuk-tuks in Ho Chi Minh, Phnom Pehn, Siem Reap, Vientiane and especially Bangkok. It was all a great ride experience. I had a relaxing ride when I visited the temple complex of Angkor wherein we hired a tuk-tuk with a driver by the day and toured us around. The tuk-tuks come in different forms and designs. In Siem Reap they are generally the style of motorcycle and trailer whereas in Phnom Pehn, it is one piece. They are comprised of steering, tank, engine with a covered tray mounted at the back. It can carry 6 people. Lao tuktuk looks like that of Phnom Pehn while Ho Chi Minh looks like that of a Siem Reap tuktuk. The one I tried in Saigon was an unmotorized. Passengers sit infront of the driver. The counterpart of tuk-tuk in the Philippines is called tricycle. 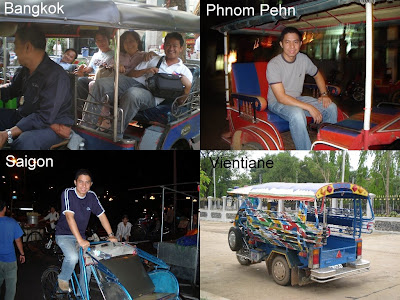 In Thailand, my foster Mom Noi together with my foster brothers Ronald of Philippines and Pangna of Laos took us to a tuk-tuk ride in downtown Bangkok. It was a wonderful experience since you get that real feel of a city ambience up close.

I remember, the tuk-tuk was even used in the commercial ad of James Bond or Pierce Brosnan featuring the visa credit card. He used the card to pay the driver for a dilapidated tuk-tuk. Tuk-tuk has been used in so many films such as in the James Bond movie.

Posted by Edwin Antonio at 3:11 PM