A Journey Down Under

A vast and huge country that make up as world’s smallest continent is Australia. Being referred to as the land down under for it lies in the southern hemisphere of the globe. This commonwealth nation has a total of six states with two major mainland territories. Canberra serves as its capital. I visited two key cities namely Sydney, largest city located in New South Wales and Darwin, a city at the top end of the Northern Territory. I traversed the continent from north to south. 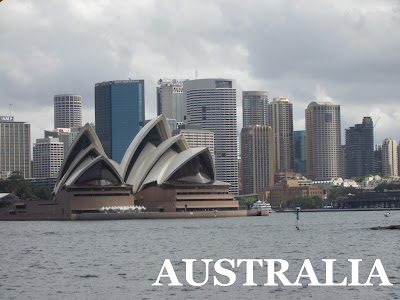 I flew to Singapore via Tiger Airways from Clark airport where I had a stopover. I was fetched by my good friend Raja at the Changi Airport. I stayed at his place with his family for overnight. I met again Ibu Intan and the rest of the family. The next day, I had a half day tour around the city.

Later in the evening, Raja and wife Linda sent me off to the airport. I was a bit anxious for it was my first trip to Australia. I looked around and saw the queue at the check in counter. Neither an Asian nor a Filipino was there. All of them were Caucasians. Luckily, I’ve seen and met at the passengers’ lounge two Filipinos, Fr. Gilbert of Cavite and Loida of Bulacan who just met each other a few minutes before I approached them. They were both flying to Darwin.

Loida lives in Darwin. She shared to us her Aussie life and identified what to see and expect from the city. The city was named after Charles Darwin, a renowned naturalist and thinker associated with the theory of evolution by natural selection. Fr. Gilbert was going on a personal trip much like of my trip and itinerary. He had a trip a little longer of a day than mine.

We flew out at around 11PM and arrived 5 hours later. Darwin’s time is an hour and a half ahead of Singapore. It was already dawn when we touched down at the Darwin International Airport. The moment we disembarked from the plane, it was an unbelievable feeling to set foot on another strange country, an outback which is one of the wealthiest and developed nations. It is an enormously huge country. I was informed by Loida that the immigration was strict with regards to dairy and poultry products so she advised us to declare if we have any. This made me worried since I had cheese, chocolate powder and other food snacks on my backpack. I was held at the immigration, they checked my bags and its contents. They sequestered the cheese and chocolate powder drink. Besides that, the immigration officer even asked me several questions about my personal details and my purpose in visiting Australia. He was surprised to find out that I’m visiting for only four days which was unusual for Filipinos since most stay either for a month or even longer.

After the interrogation, the officer concluded that I’m consistent and confided to me that he has a Filipino wife. I was the second to the last passenger to go out of the immigration area. The incident pressured me for I thought they would not let me in. Loida’s group became stressed of waiting for me to come out so Doraieh came to see me. Loida introduced me to Doraieh, also a Filipino, who fetched us.

We first stopped at Ofelia’s house. She was one of their close friends. Her house being a military shelter is highly elevated. She is married to military man and got one child. We went up the house, freshened up and rested. After relating our travel stories, we were then taken to Skycity Casino for our buffet breakfast. It was Loida who treated us. We took photos around and went to a nice site on a bayview. We were being told that nobody swims in that area since it was infested by crocs. 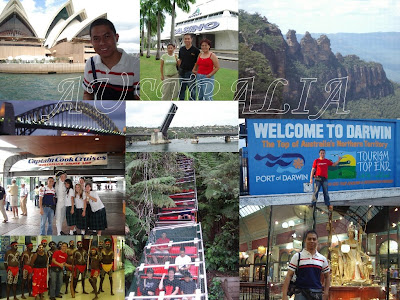 After dropping off Loida to her house, Doraieh drove us to her home and cooked lunch for us. We talked about ourselves and discussed about charitable works.

We went around the city and it was very hot, having a temperature of 40C. Darwin City is the capital of the Northern Territory, a huge slice of outback. I saw some aborigines walking and running around in barefoot. I noticed some establishments to have industrial fans which emit a spray of water to cool you down. Afterwards, we went to the mall and we luckily saw an ethnic dance performance by the aborigines. Their bodies and faces were painted with white art designs, wore red g-strings and headbands. While dancing they made some chants. They displayed long arrows. It was so indigenously entertaining.

We went to shop some souvenirs. I bought Darwin T-shirts and boomerangs. I saw didgeridoo or didjeridu, a wind musical instrument of the indigenous Australians. This is sometimes called a wooden trumpet or “drone pipe.” It comes usually in cylindrical or conical shape and has a measurement anywhere from 1 to 3 meters in length with most instruments measuring around 1.2 meters. Then, we went to the port and saw the marine vessels and luxury cruise ships docked in the area.

Later in the day, we went to the popular Fisherman’s warf wherein you can watch school of fish of different variety especially the moon fish rumble as you throw and feed them with fries. All of them rushed against each other to catch. With enjoyment of the sound of water, fresh air and the sunset at the port, coupled with an order of some fish and fries especially popular barramundi fish meat with few bottles of beer capped my day in Darwin.

My group sent me off to the airport at 11pm to wait for my trip at 1:30am bound for Sydney. I thanked the group for their wonderful hospitality and bade them farewell. I boarded the Virgin Blue airlines connecting via Brisbane to Sydney. Some mild turbulence was experienced along. You could just imagine the vastness of the land traversed for a flight of 6-7 hours. It was a trip from North to South of the huge country.

We touched down at the Sydney International airport at 9:30am. The time here is half an hour ahead of Darwin or 2 hours ahead that of Singapore. I bought at once a three-day pass ticket at the MRT station which costs AUD100. This was good for unlimited bus rides, MRT, and ferry or cruise valid for 3 days. I took MRT using the ticket then rode the Sydney Explorer bus in the morning.

I made my first stop at the Circular Quay, location of the Sydney Opera House and the Harbour Bridge. These were the popular landmarks of the city. I was awed by the beauty of these structures especially the Opera House which has a unique architecture, an expressionist modern design created by a Danish architect Jorn Utzon. It is one of the most distinctive 20th century buildings of the world and has been declared as UNESCO World Heritage Site in 2007.

I took a city map and hopped from one point to the next. The sights were just amazing. I even had a photo taken with the person dressed like Captain Cook at the port. I rode the Bondi Explorer for beach tour. I dropped by to the world famous Bondi Beach. There were lots of people coming to this place in their swimsuits and surfboards. Wow it’s indeed an incredible sight.

Later, I went for a romantic harbour night cruise where the sight was just spectacular, so romantic with all the night lights glowing everywhere especially on the bridge and opera house. I met foreign tourists in the ferry particularly an old Danish couple who went to see Australia before they expire in this world. 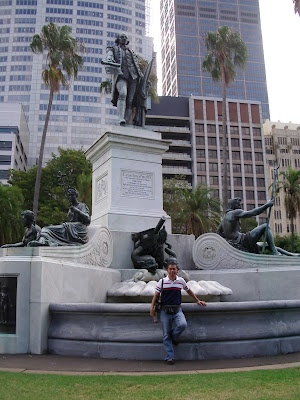 After a long day tour, I went to Blacktown at 11pm and searched my way to my host’s place at Newton Road. It was indeed an adventure to go around, search for the house at uncertain time. I was blessed that I traced it easily following the house numbers. I knocked the door then, someone opened it and I was welcomed by Jessie, my friend’s friend. He received me cordially and led me to my room.

The next day, after a breakfast with Jessie, I went back to the city. I went for another round of cruise but it was on a daytime. The sight was totally different at night. I saw birds hovered above the water and the ferry. I saw a moveable bridge that automatically lifted up as we passed by underneath.

I went back to the Sydney Opera House for a close scrutiny. You would really be amazed to see it up close. Its incredibly outstanding as the asymmetrical designs of the roof were put up together. Numerous people flock to visit this structure. Later, I went to the Royal Botanic Gardens, to Queen Victoria Bldg and museum, the Market City, Sydney Town Hall, Darling Harbour, Sydney Olympic Park, Art Gallery of New South Wales, and to the Sydney Chinatown. I ate and enjoyed Chinese noodles here. Proceeded later to the Circular Quay and stood by at one of the corner as I enjoyed my ice cream. I listened to an acoustic singer who performs in a corner where passersby drop few coins in appreciation of his music. I went home late at 12 Midnight.

Packed my things and had breakfast. I bade Jessie goodbye then met up with my friend Hilda’s mother, Tita Vicky. She toured me to the Blue Mountains. It is a popular tourist destination approximately 48km west of Sydney with the Three Sisters as its main attraction. I rode skyway, the cable car and the train where I spent AUD 29 for the scenic world rides. I had seen the coal mine exhibition. We had a bus ride down to the Katoomba Scenic Highway where the driver served likewise as our tour guide. It was humid in the area. 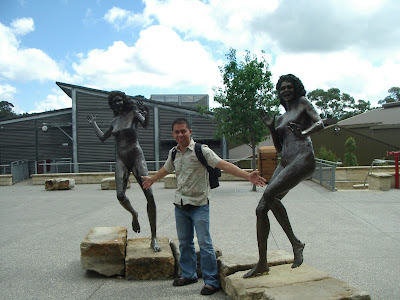 We went back to the city to catch my flight to Darwin. We flew out at 7pm. There was scanty passenger on board Virgin Blue so I was able to find empty seats to lie down to. I had to get up every now and then since we experienced frequent turbulences during the flight. We arrived in Darwin at around 1am and had to wait for my flight at 5:35am bound to Singapore.

I arrived past 9am in Singapore and just took the MRT to Raja’s place in Kembangan. I had a side trip to Batam Indonesia on the following day and then next day, Aya Mansuri sent me off to the airport for my flight back to Philippines.
Posted by Edwin Antonio at 2:27 PM