An Afternoon of Music with Manila Concert Choir

I just attended today the concert of the highly-acclaimed Mania Concert Choir (MCC) at the Northern Christian College (NCC) Auditorium. NCC President Ceasar Agnir brought the whole group to Laoag City to perform before the Ilocanos free of charge. This was highly commendable since it brought back much love, joy and appreciation for music by the community. 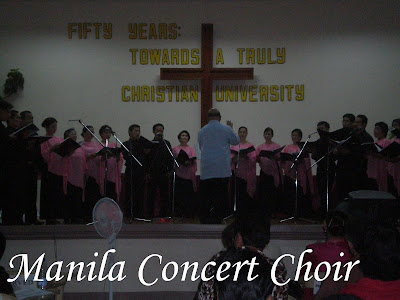 MCC is a group formed more than 5O years ago and it’s a world renowned choral group. It is headed by their president Prof Leonor Briones of the University of the Philippines who is a former National Treasurer. Dr Romulo Pizana, a professor of mathematics of the same university is the conductor. They are composed of people from different disciplines and of varying ages with 19 years old as the youngest of the group. Their repertoire was a melange of spiritual, classical, Tagalog and Ilocano favorites. Their voices were so powerful and mesmerizing. I had the chance to enjoy their rendition particularly of the Ilocano songs and captured it on video.
Posted by Edwin Antonio at 8:18 PM