Last Saturday, I attended the 9th Governor’s Ball held at Siera Madre Ballroom of Fort Ilocandia Resort Hotel in Laoag City. This event was a fundraiser of the provincial government to support the projects and activities of the Museo Iloko.

Duhat wine and basi with cornick were served at the corridor. Dr. Jovencio Cuanang and some other VIPs were around chit chatting. Almost everyone was in his or her elegant Filipinia and abel suits.

Governor Michael Marcos Keon gave a speech opening up the affair. He greeted the guests such as Congressman Ferdinand Marcos Jr. and wife Atty. Liza Marcos, Ms. Irene Marcos Araneta and the officials of the province. He talked about his projects and accomplishments.

The highlight of the event was the awarding of the Gameng Lifetime Achievement Awards to three selected individuals who excelled in their craft, which contributed to the enrichment of the Ilocano cultural heritage. 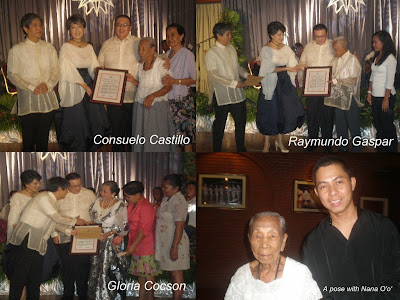 Consuelo Castillo or fondly called Nana O’o is 94 years old who is revered as spiritual guru. She is an expert in offering prayers for the deceased at the time of death to its 9th day, 1st month, 6th month and first year anniversary. At her age she still has the sharp memory to recite the litany.

Raymundo Gaspar, 83 years old, builds calesas since 1960. He designs and creates the wheels to the body of the calesa. The third awardee was Gloria Cocson who is an expert in the field of emapanada making. She may even be called the empanada queen since she is in the business for so long. These are people who contributed in the Ilocos heritage. It is their wish to pass on the legacy to their children so that they continue what they have started.

Dinner was served with roast beef, barbecued spare ribs, assorted cold cuts, fresh garden salad, steamed rice, carbonara pasta, potato salad, poached fish in ginger and onion sleeks, desert of maja blanca and fresh fruits. I was surprised to see on the table mamaen composed of the boa and gawed placed on top of a miniature ulnas. Likewise the decorations on the stage and the entrance door caught my attention since it was palms with eggplants, tomatoes, okra, string beans to represent as flowers. It was creative.

Ballroom dancing was the last part of the program as enjoyed by most guests.

Posted by Edwin Antonio at 4:39 AM