Spanish Program on Air in Ilocos

I was surprised to read on newspaper last month that a Spanish radio program was launched in Laoag City. This was entitled “Filipinas, ahora mismo,” a 60-minute cultural magazine program being aired over DWFB Radyo ng Bayan at the frequency of AM 946khz from 7-8pm Mondays to Fridays. Due to similarities of local culture to Spain, the historical ties with her more than 300 years ago and the aim to link Ilocano listeners who could speak and understand Spanish language prompted a media outfit to produce this program. 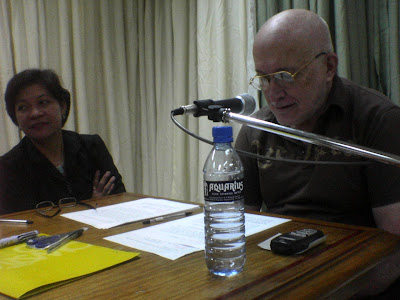 The radio show features Spanish language, culinary arts, cinema reviews and music favorites in Spain. This was a joint venture between the government’s Bureau of Broadcast Services and the Associacion de la Prensa de Cadiz (APC) of Andalucia, Spain. I was told by a staff member of the radio station that this is a pre-produced show. You hear the same radio show conducted in Quezon City, Zamboanga and other regional radio stations. This is being presented by the project coordinator Christine Rabago and Bon Vibar, program host as shown on the photo.I had the chance to tune in to the later part of the program today and I enjoyed the fast beat Spanish music but I think I have to study the language to appreciate it more. While listening to the show, I felt like I was in Spain or Latin America. Muchas gracias mi amigos!
Posted by Edwin Antonio at 8:06 AM