The most controversial terminal in the airport complex of Manila has finally been put to operation on July 22, 2008 after several delays of its opening. It is one of the most controversial government projects since there were legal battles and red tape involved especially international arbitration cases that resulted from the mismanagement of the project. 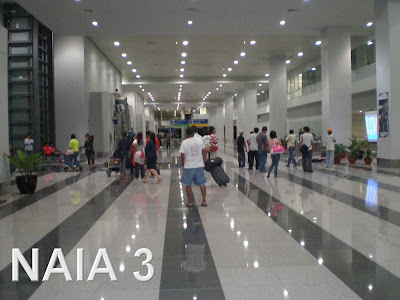 Despite the controversy, wow, we are still proud to say that we have now a big and spacious airport to accommodate growing number of international and local tourists in the Philippines. This Ninoy Aquino International Airport Terminal 3 or NAIA 3 is situated in Villamor Air Base built on 63.5-hectare lot. It has 182,500 m2 of total floor area and 1.2 kilometers in length. It is capable of servicing 33,000 passengers daily at peak or 6,000 passengers per hour.
I was able to experience this newest airport when I took my flight from Laoag to Manila in August and Hong Kong to Manila on September via Cebu Pacific airline flights. It has a wide airstrip. We had to take the bus to get to the terminal building the first time. Second time, a tube was provided. Most of the flights of the said airline will be flying and landing in this airport. A public bus or van found in front of the airport is scheduled almost every now and then to take passengers to terminal 2 to terminal 1 to MRT Pasay then back to terminal 3. A minimal fee of Php 20 is collected per passenger.
Posted by Edwin Antonio at 10:11 PM