A Trek to Kaangrian Falls

Just today, I joined the group of Green Ilocos Norte and Network Advocacy (GINNA) trek the Kaangriaan Falls located in Baranggay Paayas in the town of Burgos, Ilocos Norte. The trail that you would pass by is covered by Barangay Agaga. The distance runs around 10km from the municipal hall to the site. Half of the road may be accessible by car and the rest would be trekking. 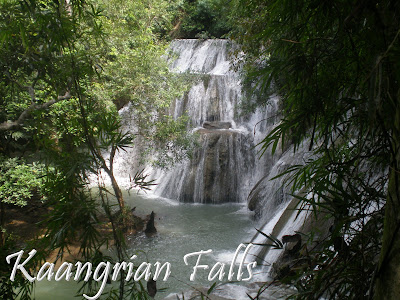 This water falls was discovered in the year 1998 when the local government was looking for a good water source and took a photo of this natural wonder. Many people including members of US Peace Corps Volunteers were impressed with it and they began to explore this place. By word of mouth, it slowly became popular tourist attraction and was featured in some travel shows.
The name Kaangriaan was derived from the Ilocano word “naangri” which means stinky. The reason for arriving at this term is that there were some bat caves and the bat droppings made it stinky in the area. However, I have not smelled any odor. 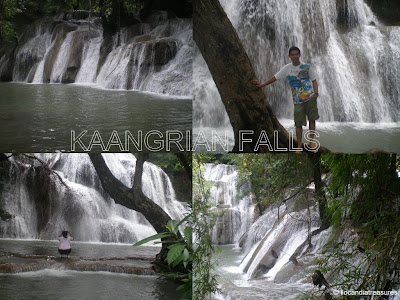 It was so breathtaking and amazing. Rejuvinating is the effect of the sound of falling water. One can take a dip and experience the massaging effect of the water and be refreshed. It’s the best time to visit the place during rainy season to December. The water starts to become thinner in the months of January to summer time. The water runs all the way down to Dirique in Pasuquin out to the sea.

Posted by Edwin Antonio at 1:01 AM

I am a native of dirique Davila and We just visited kaangrian falls 3 days ago, together with my office mates we experienced the fun of exploring this amazing place,, really we need to preserve Kaangrian falls,, and its a must-see tourist spot here in Ilocos Norte.

you are right my friend. thanks for your comment.

right....sobrang ganda ng lugar, we visit it with my boyfriend a local of Ilocos, and i found the place superb....

wow you had good experience of Kaangrian, hope you can share it to others. thanks for your comment.

very beautiful! but did you swim? is it safe to swim? I mean how deep is it? I love waterfalls! We are planning to go to Ilocos Norte this December. I never knew there was a waterfall there. Hope we can go there.

How is the trekking time? Do we need a local to tour us? Because maybe it is easy to get lost. Thanks!

hi izel, yes its really a wonderful place. visit it again. thanks for your comment.

hi there shallowsleep, thanks for your comment. we were not able to swim when we went there but its safe to swim in there. you need a local to guide you. you need to really to trek to get to the falls. enjoy!

Hi I just want to ask if you have contact numbers for guide in this place. I really wanted to go here. Amazing review! Thank you in advance :)

Hi I just want to ask if you have contact numbers for guide in this place. I really wanted to go here. Amazing review! Thank you in advance :)

thank you for your inquiry about kaangrian falls, but I don't have any contact details of guides for this particular site. but i can refer you to mr. jimenez, brgy chairman of poblacion. please email me at antonioedwin@gmail.com to get his number. thanks.