The Petronas Twin Towers in Kuala Lumpur (KL) in Malaysia became the world’s tallest buildings in 1998 to 2004 and were surpassed by Taipei 101. They constructed these buildings in a period of six years with height of 452 m (1486ft). It has a total of 88 floors with service main lifts which are double-decker, the lower deck takes passenger to odd numbered floors while upper deck to even numbered floors. Floors 39 and 40 are not accessible as office space. The skybridge connecting these two towers is located in the 41st floor where you can get a good view of KL. A shopping complex called the Suria KLCC is located in the ground floor. 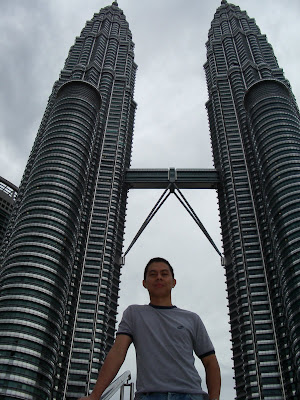 I visited the building on May 05, 2007 where we queued very early in the morning to avail free entrance. Did you know that this site was used in making the film Entrapment by Sean Connery and Catherine Zeta Jones? It was also a setting for some Bollywood films. Last August 7, 2008, my photo shot of this twin towers was published in the Manila Bulletin for the second time. 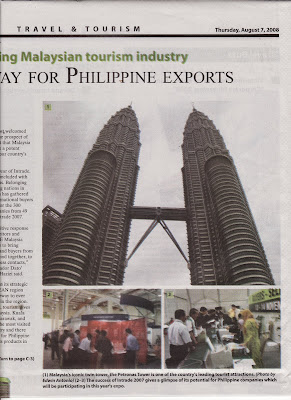 Posted by Edwin Antonio at 4:19 AM