Disneyland is branded as the happiest place on earth. It is the second most visited park in the world. It is owned by Walter Disney who produced animated films initially with characters of Mickey Mouse, Mini Mouse and followed by others such as Sleeping Beauty, Dumbo, Winnie the Pooh, Goofy, Cinderella and many others. 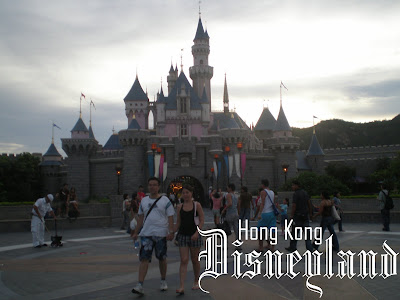 I thought this is only for kids but I was mistaken. Everybody of all ages can enjoy Disneyland with all the rides and entertainment provided in the resort. We have the child in all of us so I relived that in me once more.
Weekend is a peak day so an adult shall pay HKD350. Its upgradable to annual pass by just adding HKD300 on that same day of purchase. Seniors and children entrance fees are given discounts. We started to visit some of the shops and bought some souvenirs. We watched the spinning of Toy Story Zoetrope, newest attraction at the Art of Animation. These are static characters that come to life by spinning.
My mom and I were able to watch the Mickey Water Works on parade where the different Disney characters participated in the activity with all that of sprinkling water on the guests. It was really enjoyable to fight the heat in the park. After this, we went to ride the Disneyland Railroad where we alighted at Fantasyland and rode Dumbo the Flying Elephant with my mom. Later we joined the storybook journey through Hundred Acre Wood in the Many Adventures of Winnie the Pooh.
We walked through the magical portal of the Sleeping Beauty Castle. Its so amazing that everybody can’t help but take photos. 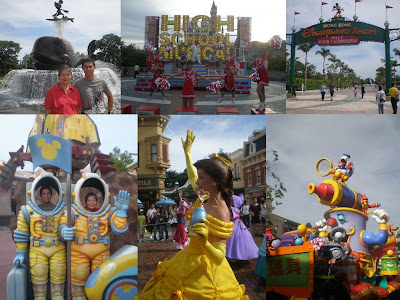 While my mom is taking a rest I went to Tomorrowland where I had a thrilling high-speed adventure that reached the universe in a dark space with the galactic forces, there was lightning, stars and constellations and then back to interstellar roller coaster. It was a great adrenaline pump. This is not recommended for people with hypertension or heart ailments.
High School Musical: LIVE! came in to perform in the forecourt of the castle. They performed the hit songs from the movie and invited the audience to sing and dance with them. It was a very entertaining show.
Next stop was riding the flying saucer of the Orbitron, then I drove the future electric cars that cruised along the highways of tomorrow at Autopia. That was an incredible ride.
As a finale, we had an Stitch Encounter in an interactive movie. It’s a talk and play games with mischievous Experiment 626 (Stitch) at the Space Traffic Control Center. He has pointed some people from the audience and talked to them and responded in real time and situation. Its never the same show twice.

Posted by Edwin Antonio at 8:19 AM

too bad, i had a tight schedule!