Olympic fever is on in Beijing

Today marks another significant day in the history of China. This is the holding of the 2008 Summer Olympics. They coincided the Olympic Games with the date of triple numbers 888 since the Chinese belief this is a lucky combination of numbers. The date, August 08, 2008 only passes once in a lifetime. At 8pm tonight, a grandiose opening ceremony will be held at the National Stadium. 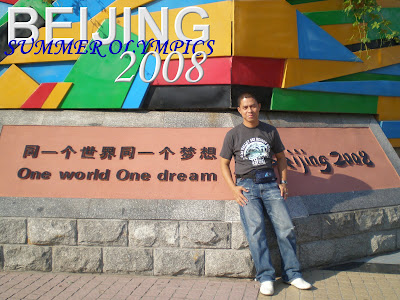 Eric Ang, an Ilocano shooter who hails from Laoag City, is competing in this year’s Olympics in the men’s division of trap shooting. He won bronze medal in the same event in the 2005 Southeast Asian Games. Eric has earned a wildcard berth in the Beijing Olympics in December according to the Philippine Sports Commission. The Philippine nation has high hopes that the entire delegation to Beijing would bring home the gold.
I was able to observe Beijing’s status last year when I attended a leadership program. Everything was under construction and renovation. I have seen the National Stadium still in its skeleton form but after a year it was an amazing structure of a bird’s nest form and the latter became its popular term. Water cube is similarly overwhelming to see from the photo releases. Wow, its truly a big preparation from the Chinese government. To date this is the highly budgeted Olympic ever in the history.
Posted by Edwin Antonio at 1:31 AM