It was raining the entire week in Ilocos and I was apprehensive that my flight to Basco on August 8, 2008 might be cancelled due to bad weather. However, it showed a good morning weather in Metro Manila when we flew to Basco via Asian Spirit. I was so lucky to get a great deal of airfare at P2,480.00 roundtrip, since a regular roundtrip airfare would costs you P10,000-12,000. It was actually an anniversary promo fare. 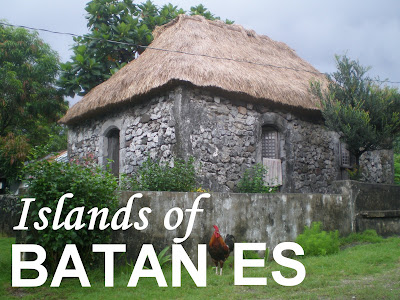 We boarded a 50-seater De Havilland Dash-7 propeller aircraft which we flew at 5:30AM. It was a two hour flight. It was a very nice flying experience since the crew was accommodating and I also had the chance to get a photo from the cockpit with the pilots. I met people from the airport to the plane that includes none other than Governor Castillejos. 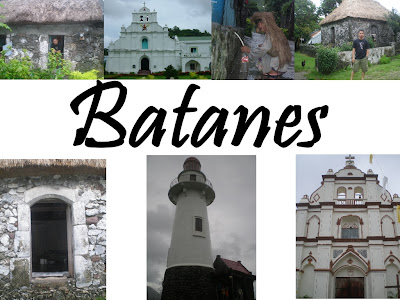 From the aerial view, we saw the exciting rolling green hills and pristine beaches. When we touched down smoothly at the tarmac of the Basco Airport, there was a sudden heavy downpour which limited us to get around. I stayed at Shanedell’s Inn for a rate of P350 per night accommodation. I met some guests such as Karen, Keno, Jammie, Alvin, Lanie, Gerald whom we got to hang out with and thru the kindness of locals Ed, Carlos who guided us. 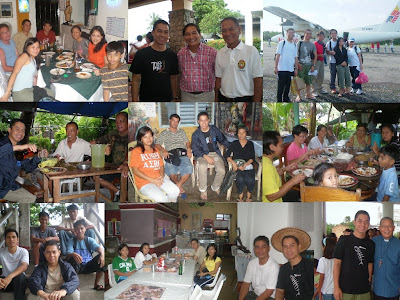 On my first day, I dropped by at the house of my co-passenger Auntie Rosario Ugali. Her family cooked for me an Ivatan dish, supas. It was fried yellow rice mixed with bits of pork and tinted with the yellow ginger. Mirada, is another dish offered to me consisted of flat snails. Ubud, is made from the grated trunk or root bulb of a banana tree cooked in coconut milk added with some meat tidbits.
I attended the wake of her brother-in-law which I learned that anybody who dies got to wait for a couple of days and the corpse placed in a bed temporarily since casket is not readily available. Its made to order and people help each other to make one. In the far flung areas, they just place the cadaver in a box and not even embalmed due to absence of formalin. There is a bayanihan spirit among the peoples in times of grief. I had the chance to jam over some Matador brandy with the Ipula, people who migrated to the island. We sang our heart’s out with the accompaniment of a guitar.
On my second day, it was drizzling. I went to the Saint Dominic Church and later at the Saint Dominic College (SDC) where I met a group of students from Ifugao who went to the island to work as house helpers at the same time study.
When I saw a jeepney, flying over, I just hopped in and I went to Ivana to see the old Ivatan houses. I saw the house of Dacay and interviewed the old lady. It rained so hard again and I saw Mr. Ronnie Agoto, a former provincial board member who I met at the airport. He invited me to their house while they were busy cooking for his grandson’s birthday. First name is the term they used to refer to food served a day before the occasion and offered to some important persons, while balance is the leftover food served a day after. Lunes is another Ivatan food made of pork fried in its own fat. They just add salt to it and put in a jar soaked with its oil and this lasts for a long time. Wild ferns abound in the island which is made into green salad by just blanching it. 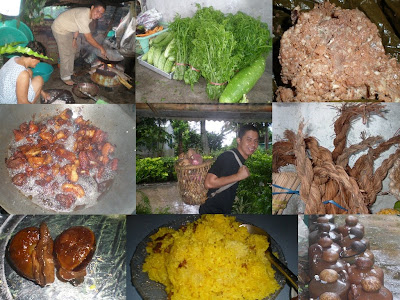 It was so amazing that every person I see on the street would smile and greet me. Wow, you rarely see this nowadays.
I visited the Basco lighthouse in the afternoon with my dorm mates. We trekked from downtown to uphill. It was breathtaking to see the entire Basco on one side and the China Sea on the other side.
On my third day, I joined my dorm mates to Itbud, Uyugan where we saw more of the old and sturdy Ivatan houses. It is a quaint village. We met some of the locals. We peeped in to the kitchens which are so smoky when they cook. Garlic and onions are hung inside for long time preservation. The traditional kitchen uses fire woods. We climbed up the grotto and enjoyed the uphill scenery. We attended the mass celebrated by Fr. Roy Maliglig at their chapel. I personally asked and heard some young girls sing Laji the old Ivatan song.

I left Itbud to visit the Honesty Coffeeshop in Ivana. I was able to talk to the owner. Its her dedication to help the people at the port eversince by offerring them a cup of coffee. She was busy attending the farm so she just left her goods and asked people to drop their payments at the box. I had luch with Mr. Agoto for his grandson’s birthday. I have seen the Spanish old bridge and the Ivana and Mahatao churches which were built in18th century.
It was so timely that when I reached Basco in the afternoon I chanced upon the fiesta parade and watched the palu-palo dance and other cultural performances at the plaza.
It was indeed a fantastic experience of Batanes! Dios Mamajes.
Posted by Edwin Antonio at 6:44 PM