Some 15 students from diverse courses led by Dr Gianna Rodriguez a faculty member of the College of Medicine of the University of Michigan in the United States of America visited Ilocos under the program Global Intercultural Experience for Undergraduates (GIEU) which aims to develop new and innovative approaches to teaching and learning. The group’s subject was Rehabilitation in Philippine Communities. They were scheduled to visit Rizal Province, Ilocos Norte, Baguio, and Boracay from June 8 to July 05, 2008.
The group arrived on Friday June 13 and was billeted at the Sitio Remedios Resort in Currimao. They were awed by the beauty of the villas and the tranquility of the place as they were showed around by Dr. Cuanang and later hosted them for dinner composed of Ilocano foods. 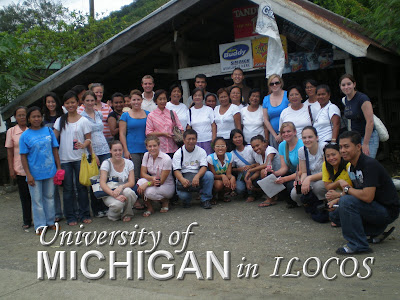 On Sunday, they visited Vigan City and had dinner at Sagwan Studio where they had the chance to don some Spanish and Filipino costumes captured in sepia photos.

On Monday, they visited the provincial capitol to pay a courtesy call to the Governor but he was out of town. They were instead received by the senior officer Gertrudis Ruiz and tourism officer Rene Guatlo. A group from the delegation delivered a talk regarding Community Based Rehabilitation and later visited the Governor Roque Ablan Memorial Hospital (Provincial Hospital).

On Tuesday, they visited our clinic Laoag Rehabilitation Station to interview some of our patients. They asked the conditions of the patients with disabilities and how they cope up with such. After conducting interviews, I toured them to Fort Ilocandia Resort Hotel. They were amazed of the resort’s ambiance and enjoyed the animals at the mini-zoo.
We all had lunch of beef and chicken at Saramsam Café and local desert of rice balls in molasses, fried sweet potatoes and bananas and fresh pineapples and watermelon.

After the sumptous lunch, we went to visit Mariano Marcos Memorial Hospital in Batac City. They interviewed outpatients undergoing physical therapy at the rehab department and the rest did the same thing to the inpatients in the wards. I facilitated the interview of a certain group.
Helen, the Chinese-American delegate and I for one were amazed to see a poster inside the charity ward that says indigent patients can apply for pay in kind (PIK) payment scheme in the form of agricultural products or seafoods or personnel service rendered (PSR) which means the patient’s relative can pay by working at the hospital and paid 25 per hour. This is a good innovation. Olga and Liz interviewed a 32 year old lady with muscular dystrophy. 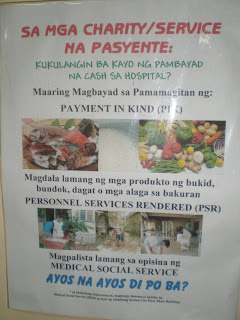 On Wednesday, Dr. Alipio, Mr. Guatlo and I joined them to Pagudpud. The group was welcomed by the Barangay Health Workers (BHW) by singing Ilocano songs. They divided themselves into three and each station was rotated on by the health workers. A talk on Community Based Rehab was delivered and challenged the group of health workers to accept the concept to help their patients with disabilities become independent. There was a dialogue among the delegates and health workers. We had lunch at Saud Beach Resort where a menu of fish was served. They were impressed by the white sand beach. Later, we went on home visits to people with disabilities where they met people with leprosy and chronic arthritis. On the way home to Currimao, we dropped by at the Burgos Lighthouse. 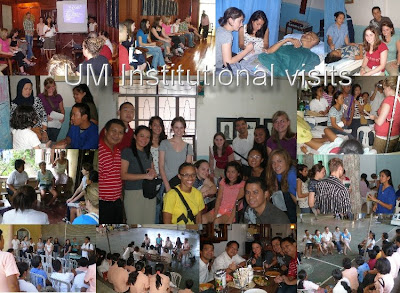 Posted by Edwin Antonio at 6:07 AM