The 1st Batac Charter Day was celebrated today. It has been a year since it became a city. It is the second town of the province of Ilocos Norte to rise as a city. In celebration of its anniversary, they featured the Empanada Festival showcasing and promoting the very popular traditional fastfood that is empanada. 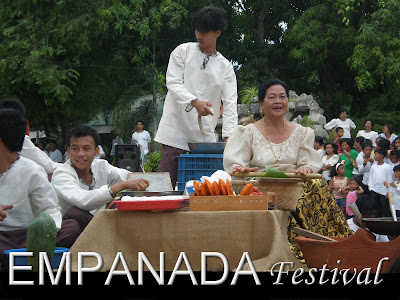 There was a dance parade participated in by locals both young and old alike. There was a long line of participants dancing in the uniform music of Empanada. The music was piped in along the streets. It was followed by street dancing where different stages of preparing an empanada were depicted through dances.
It was started from the planting of rice (panag-raep iti pagay), harvesting rice (panag-ani iti pagay), planting, harvesting and cooking of mongo beans (panagluto iti balatong), grating papaya (panag-gadgad iti papaya), eggs catching (panag-ala iti itlog), sausage making (panag-aramid iti longganisa), preparing rice dough (panag-aramid iti belaay), cooking empanada (panagluto iti empanada), and enjoying eating empanada (panangan iti empanada). This part of the program was participated in by college students and youth groups. 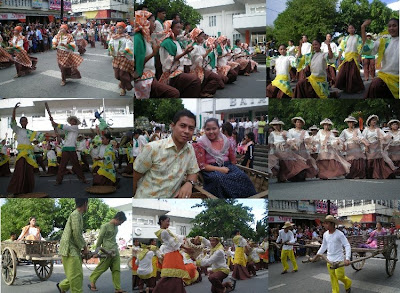 There was a float displayed carrying empanada makers led byManang Glory who has been in the industry for a long time and can be called the queen of empanada. She appeared and was interviewed in various television shows and papers.
There was snack break. I was lucky to be served with a free empanada and a drink when I joined a group of baranggay officials at the riverbank empanadahan. What a way to savor empanada on its festivities. 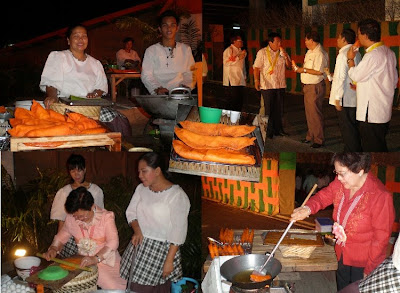 A mass was celebrated later. Followed by a dance showdown presenting the same stages of empanada making. Prior to this was some speeches delivered by the guest of honor, mayor and the governor. The multitude of spectators and guests were taught by choreographers on how to do the empanada dance. There was also an empanada making contest among the lady political leaders and empanada eating contest among the male political leaders. Winner in each category was given a one year free of charge good for 3 persons empanada to any of the vendors.

Posted by Edwin Antonio at 8:43 PM